If you’ve ever played a Battlefield game before then you know what to expect from the multiplayer aspect; four separate classes each with different weapons available to them, giant set pieces that change with level triggers and as always people making made dashes for the helicopters with no idea on how to fly them. Yes it seems like the formula is intact and well with all but a few changes. The bullet torn maps of warzones in train depots and rundown desert cities have been replaced with a sprawling metropolitan cityscape and factions of soldiers are re skinned as Cops and robbers. 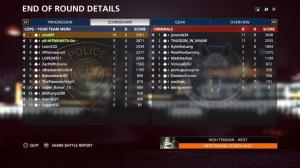 The main attraction of the beta is the Heist Mode, a capture the flag style battle where the main objective is to, if you’re on the criminal side, to blow up a vault truck, steal the money within and escape and as you may have guessed, the opposite if you’re on the side of the police. If you manage to blow the truck and grab all the money, you win. Standard Battlefield style game play follows in the massive city map. The gigantic level triggers that bring forth massive destructive change seem a bit out of place when you consider the only thing on the line is money. There wasn’t anything wrong with beta that I could see and I did have fun while playing it, but I didn’t find myself being excited for the release at all or wanting to play it beyond the point that I did. With no new innovations I could easily see myself playing BF3 or 4 if I wanted the experience of it. I can’t help but wonder if the Battlefield series is struggling in an effort to keep up with the serialization of the Call of Duty series and if Hardline is just a cleaner, hopefully less glitch ridden, version of 4.

Have you played it? What do you think? Let us know